Thomas Wolsey, Archbishop of York, Chief Minister and favorite of Henry VIII, took over the site of Hampton Court Palace in 1514. It had previously been a property of the Order of St John of Jerusalem. Over the following seven years, Wolsey spent lavishly to build the finest palace in England at Hampton Court, a figure of 200,000 gold crowns. Wolsey rebuilt the existing manor house to form the nucleus of the present palace. The place was home to the tutor dynasty during the Reign of King Henry the 8th and served as the platform to his various scandals that marked his life and his family. Most of his wives lived in the castle at one time or another until the King fancied another one and they went to the chopping block. 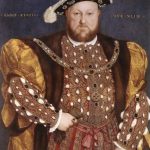 Following the tutor dynasty, the palace became more of a summer house for the royalty until the reign of William and Mary which saw the rebirth of the palace with many new additions being made which were later coupled with additions by the various Henrys.

Today the palace stands as a stark and opulent memoriam to the crown and the royal power of England with fairly large gardens in addition to the palace itself. Upon arrival like most other British monuments, once receives an audio guide that takes one throughout the entire ground but in the instance of this palace its more suggested to do the touring in any order one wants as the large nature of the palace lend itself to a more free forum visit. Though for clarity sakes, the author recommends visiting the exhibit on early life of Henry the 8th to provide valuable context for the rest of the tour. 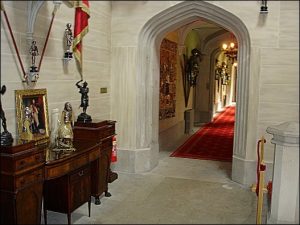 The main sites of the palace can be found in the King Henry the 8th’s apartments route as it goes through the great hall which its noted for its high, lavishly decorated ceiling and matched in grandeur by the tapestries that line the walls of the hall. The author suggest taking ones time in this room and the route as each room contains remarkable and high opulent artefacts that demand time in order to truly soak in its importance and beauty. The next big room in this route is the chapter royal upper floor where one can see a reconstruction of the crown of Henry the 8th which was destroyed in the Puritan Uprising. Note that no photography is allowed in the chapel royal and it is heavily enforced.

The remaining routes go through the lives of William and Mary and the kitchen of the Tudors with a route dedicated to Mantengna’s Triumph of Caesar which is the room leading the William and Mary’s apartments Note that the palace hosts rotating special exhibits that make take up one or many rooms of a route as with the case of the authors’ visit. Ever route should take 30 or so minutes with the palace overall taking a large portion of the day.

Following the palace, one can explore the gardens which are included with the price of the ticket. The gardens cover a large portion of the grounds with various ponds filled with swans and ducks that provide many photo ops. A well known hedge maze resided in the garden and is recommended if one has kids to occupy them for some time. Overall one can spend 1 to 2 hours in the gardens making the entire visit an all day affair if one does everything the palace has to offer.